The results of a recent Texas A&M University-led study provide insights into the mechanism by which estrogen can decrease insulin resistance and the production of glucose, reducing incidences of Type 2 diabetes.

“In this study, we investigated the role of estrogen in control of glucose homeostasis, which has a profound impact on our understanding of obesity and diabetes as well as potential dietary interventions,” says Dr. Shaodong Guo, primary study investigator and Texas A&M AgriLife Research scientist in the department of nutrition and food science in College Station.

Guo says recent research on the prevalence of Type 2 diabetes has shown gender-related differences, especially a reduced incidence of the disease in premenopausal women. Clinical and animal studies have shown a strong correlation between estrogen deficiency and metabolic dysfunction.

“In general, glucose homeostasis is maintained by glucose uptake in muscle and adipose tissue in addition to glucose production in the liver,” he explains. “However, studies have shown the reduction of estrogen in postmenopausal women accelerates the development of insulin resistance and Type 2 diabetes.

Conversely, he indicates clinical trials of estrogen replacement therapy in postmenopausal women have demonstrated a lowered insulin resistance as well as reductions in plasma glucose level.

Guo says estrogen deficiency or impaired estrogen signaling is associated with insulin resistance and faulty regulation of metabolic homeostasis, which contributes to the development of Type 2 diabetes and obesity in both human and animal models.

But the exact contribution of the tissue-specific action of estrogen to metabolic changes and underlying mechanisms have not yet been elucidated through research. 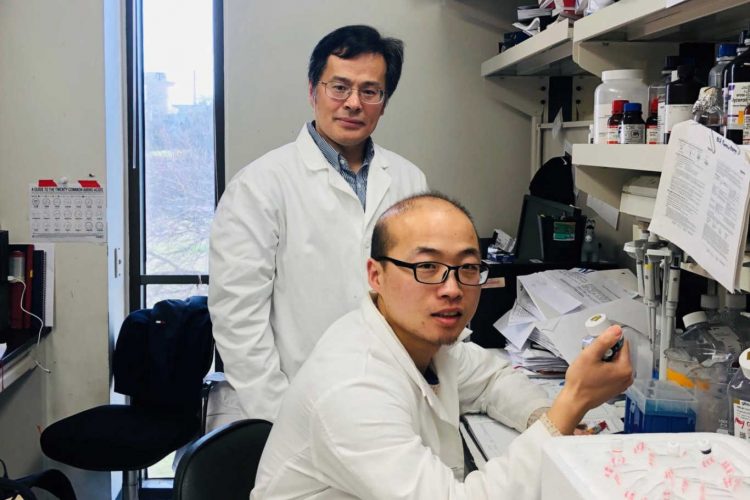 Dr. Guo (standing) with Wanbao Yang, a Ph.D. student in Guo’s lab at Texas A&M University. Yang was the second author of the study investigating the role of estrogen in control of glucose homeostasis. Credit: Texas A&M AgriLife Research photo.

“Premenopausal women exhibit enhanced insulin sensitivity and reduced incidence of Type 2 diabetes compared with age-equivalent men,” he explains. “But this advantage disappears after menopause with disrupted glucose homeostasis, in part owing to a reduction in circulating estrogen.”

Guo notes there is also a potential risk of breast cancer or stroke as a side effect of estrogen therapy, which is a significant roadblock to its use as a therapeutic agent.

“This is why it is so important to understand the tissue-specific action of estrogen and its molecular mechanism in metabolic regulation,” he says. “Once that mechanism is understood, it will aid in the development of targeted estrogen mimics that can provide the therapeutic benefits without unwanted side effects.”

In their study, Guo and other researchers investigated the action of estrogen on glucose homeostasis in male and ovariectomized female control and liver-specific Foxo1 knockout mice.

“We wanted to understand the mechanism by which estrogen regulates gluconeogenesis by means of interaction with hepatic Foxo1,” he explains. “Foxo1 has an important role in the regulation of glucose production through insulin signaling. It is an important component of insulin-signaling cascades regulating cellular growth, differentiation, and metabolism.”

He says in both male and ovariectomized female control mice, a subcutaneous estrogen implant improved insulin sensitivity and suppressed gluconeogenesis. However, the estrogen had no effect on the liver-specific Foxo1 knockout mice of both sexes.

“This suggests Foxo1 is required for estrogen to be effective in suppressing gluconeogenesis,” he says.

“We further demonstrated that estrogen suppresses hepatic glucose production through activation of estrogen receptor signaling, which can be independent of insulin receptor substrates Irs1 and Irs2. This reveals an important mechanism for estrogen in the regulation of glucose homeostasis.”

Guo said study results support the hypothesis that improvement of glucose homeostasis by estrogen is regulated by hepatic Foxo1-mediated gluconeogenesis rather than by promoting muscle glucose uptake.

He says results may also help explain why premenopausal women have a lower incidence of Type 2 diabetes than age-equivalent men and suggest that targeting the estrogen receptor ERa can be a potential approach to modulate glucose metabolism and prevent diabetes.

“The identification of tissue-specific actions of estrogen and direct targets of estrogen receptors will facilitate the development of novel selective ligands that prevent Type 2 diabetes, cardiovascular disease, and obesity without promoting abnormal sex characteristics or breast cancer,” he says.

Guo also noted some foods, such as soybeans, contain a certain amount of phytoestrogens, which can function in a similar way to that of estrogen, regulating bodily glucose metabolism and insulin sensitivity.

“This study provides some important insights into the molecular and physiological mechanism of metabolic diseases and provides a fundamental understanding that dietary intervention can play a crucial role in controlling obesity, diabetes and associated chronic diseases,” he adds.

The study, online in the Diabetes journal of the American Diabetes Association.