The Federal Aviation Administration (FAA) announced new protocols for pilots with insulin-treated diabetes, which will allow them to fly commercial airplanes last week.

The new protocols are a long-awaited victory for people with insulin-treated diabetes, opening doors to a career in commercial aviation that became off-limits in 1996 when the FAA established criteria allowing pilots with diabetes to only fly private airplanes with a Special Class 3 Medical Clearance.

The FAA’s recent news is also a victory for hundreds of pilots diagnosed with insulin-dependent diabetes in the middle of their careers due to the FAA’s uncertain stance on issuing the various classes of medical clearances.

It was in June of 2011, just days after his 50th birthday, when Halicky suddenly fell very ill, losing 20-26 pounds within a week.

“I was extremely surprised with my diagnosis, I had no inclination that I was even susceptible to Type 1 diabetes,” Halicky tells dLife.

“I was devastated over the news that I couldn’t be a pilot anymore,” he recalls. “I just didn’t know what I was going to do. Back then, that was the rule, if you take insulin, you can’t fly, bottom line.”

Around the same time that Halicky was coming to grips with his new diagnosis, and finding a new career, a former American Airlines Captain, Eric Friedman, was fighting his own battle with the FAA.

The FAA had amended its AME Guide to broaden the third class insulin-treated diabetes protocol to all classes of medical certificates, including Classes 1 and 2 on April 21, 2015.

Medical certificates issued by an FAA-authorized Aviation Medical Examiner are designated as Class 1, Class 2, or Class 3. First-class is designed for scheduled airline transport pilot; second-class for the commercial pilot; and third-class for the student, recreational and private pilot.

In spite of this broadening, Friedman’s career came to a screeching halt because of a back-and forward with the FAA regarding the semantics of the supplemental information required for his application, including information that was relevant to his condition, which included continuous glucose monitor (CGM) readings, if applicable.

In his response, Friedman stated he did not use a CGM, and also presented letters from his physicians explaining that a CGM was not medically necessary in his case.

What ensued was a long period of waiting, a roadblock in his career, and plenty of lost time.

Between 2016 and 2019, Friedman and Mitchell Mitchell filed lawsuits challenging the FAA’s inaction on their applications. The ADA supported the pilots and worked to educate the court regarding the current state of diabetes treatment and medicine.

Friedman eventually lost the lawsuit to the FAA on the premise that he didn’t have a CGM.

“In winning the lawsuit filed by Friedman, they implied diabetics could hold a Class 1, 2, or 3 based on an ‘individual basis,’ but they never issued any,” explains Halicky.

In fact, the past practice of issuing pilots a Class 3 medical clearance instead of Class 1 or 2 came to a standstill by the FAA in 2015, and that’s when hundreds of pilots, including Halicky, were left hanging in a balance under the explanation that their files were under “medical review” by the FAA.

Halicky had a CGM and submitted his paperwork with CGM data. The FAA never denied Halicky’s certification, they just said it was “under review,” and left it on the desk for the last four years.

This past summer, the ADA and other pilots filed a new lawsuit with the FAA for the hardship of waiting and not issuing any certifications. The FAA filed a counter, saying they didn’t need to answer to the lawsuit because they are about to change the rules.

Indeed, this is the protocol that was published in the Federal Register last Thursday.

“Our take is the FAA still needs to answer for the last 5 years they left our careers hanging in the balance,” Halicky says.

The timing is crucial because for many creeping up in age, their time for flying is limited since the mandatory retirement age for pilots is 65.

“A lot of people lost their careers — not just changed their careers,” Halicky says. “If you’re lucky enough to be young enough to take advantage of the new protocols, then it works.”

Angela Lautner, an international flight dispatcher at global cargo airline, who is also the chapter leader @KYinsulin4all, may be a “lucky one.”

Lautner was diagnosed with Type 1 diabetes when she was in flight school. The diagnosis meant that she was no longer allowed to become a commercial airline pilot in the U.S. — her lifelong dream.

After reviewing the protocol this past weekend and speaking with the pilots with Type 1 diabetes community, Lautner says the news from the FAA is still a work in progress with a few corrections already made to the Federal Registrar website.

From her assessment of the protocol, commercial pilots with insulin-treated diabetes applying for Class 1 or 2 Medicals will be required to wear a CGM with specific functions, submit a minimum of 6 months of CGM data, submit specific clinical notes from an endocrinologist, ophthalmologist, and cardiologist, and submit results of comprehensive lab panels.

“If using an insulin pump, the pump and the CGM must be FDA approved, both separately and in combination,” Lautner tells dLife. “For CGM data, it appears the FAA wants to know the percentage of data less than 70, between 70 and 250, and above 250.”

Based on what she has read, the FAA also wants pilots to maintain an excel spreadsheet of every flight, glucose levels during flight, and any corrections to glucose inflight.

“I have more questions about the spreadsheet use because, in reality, I’m not sure how that plays out especially if our scheduled flights are short and busy with short connection times over to the next scheduled flight. This spreadsheet may be a work in progress,” she indicates.

Lautner is also personally concerned about the ever-changing health insurance coverage for CGM’s and insulin pumps as new pilots enter the workplace.

“The strength of a future employer’s health insurance plan’s coverage of these required devices may determine which companies many of us will ultimately fly for as pilots,” she says. “Not having coverage for these devices would be a financial burden for many, on top of the stress of hoping our insulin prescribed to us isn’t also removed from coverage.”

A 60 day public comment period is now in place for people to leave comments and feedback about the updated protocols. 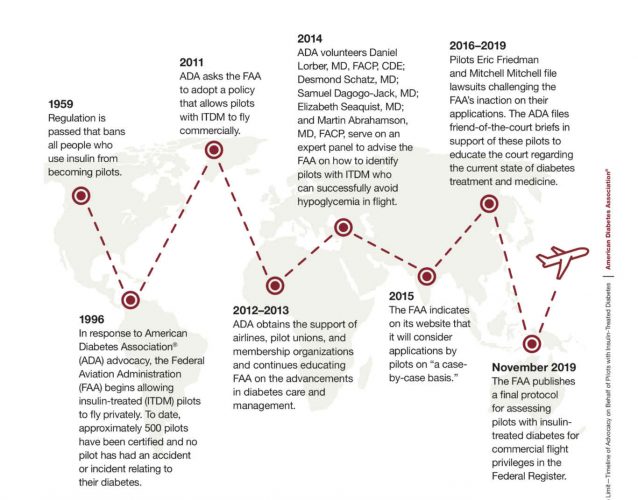 The ADA applauded the FAA on its recent decision, maintaining its position that blanket bans against people with diabetes are never medically or legally appropriate.

The organization thanked the dedication of tireless ADA healthcare professional, attorney, and pilot volunteers and staff, and commended the FAA for finishing the work it promised pilots in 2015.

“After many years of fighting for the rights of pilots with diabetes at every turn, we are pleased to have broken down a barrier that stood in place since 1959,” said John Griffin, past chair of ADA’s Board of Directors and member of ADA’s Legal Advocacy Subcommittee. “Finally, children with diabetes are free to dream of growing up to be airline pilots.”

The ADA plans to continue to work with the FAA to implement this protocol so that properly qualified insulin-treated pilots are granted medical certificates. And they eagerly await the day the first pilot treated with insulin is cleared to fly a commercial plane.

“It’s a wonderful thing for the future of Type 1 diabetics in America,” Halicky says, “I have a lot of friends whose children wanted to be pilots but couldn’t because of diabetes. Now, it’s a career they can actually have.”

Halicky hopes to resume his career as a captain, now that new changes are on the horizon.

dLife is awaiting a response from the FAA for comment on this story.