The prevalence of diagnosed diabetes among the U.S. population is s 9.7%, and undiagnosed diabetes is 4.3%, making the total number affected by the condition 14%, or roughly 30 million Americans, according to a new CDC report.

Eberhardt also mentioned in the interview there are a number of factors that might be responsible for the increasing numbers including an aging population and obesity.

The results of the study show that among all adults with diabetes, 30.7% had undiagnosed diabetes, indicating people need to be tested for diabetes even if they think they don’t have it.

Figure 1: Age-adjusted prevalence of total, diagnosed, and undiagnosed diabetes among adults aged 20 and over, by sex: the United States, 2013–2016. 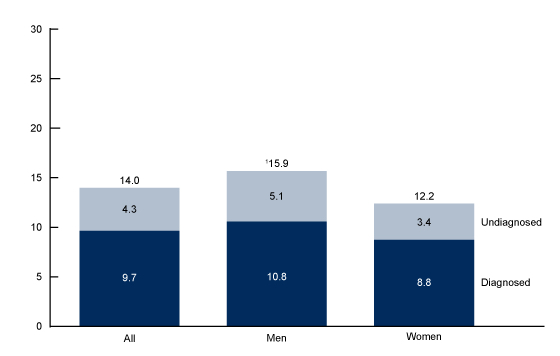 Other key findings of the study were:

For the study, the researchers used data from the U.S. National Health and Nutrition Examination Survey, which is a cross-sectional, complex, multistage probability sample of the U.S. noninstitutionalized population.

The survey consists of interviews conducted in participants’ homes, standardized physical examinations in mobile examination centers, and laboratory tests on blood and other specimens.

During 2013–2016, Hispanic, non-Hispanic black, and non-Hispanic Asian persons, among other groups, were oversampled to obtain reliable estimates on these subgroups.

Race- and Hispanic-origin-specific estimates reflect individuals reporting only one race; those reporting more than one race are included in the total but are not reported separately.

Criteria from the American Diabetes Association were used to define diabetes. Participants were randomly assigned to a morning, afternoon, or evening exam.

Fasting plasma glucose data from the morning exam (after an 8- to 24-hour fast) were used to define total and undiagnosed diabetes.

BMI was calculated as weight in kilograms divided by height in meters squared and rounded to one decimal place. Pregnant women were excluded.