There’s a new cookbook coming out next month, Fresh and Flavorful Latin Superfoods that’s all about bringing us back to cooking at home.

We speak to the author, Chef Letícia Moreinos Schwartz, to learn more about her new book, which focusses simple and healthy recipes for people with and without diabetes.

“People are eating tons of take-out and eating foods from a bag or a box,” Schwartz tells dLife. “As a result, people are getting fatter and sicker, in fact, sicker than people realize — more than 100 million adults in this country have prediabetes or are already diagnosed with diabetes.”

And Schwartz says the excuses are always the same: “I don’t have time to cook” and “I don’t make time to exercise.”

Diabetes is particularly prevalent in the Mexican and Latin communities. In the U.S., alone almost 12% of adult Hispanics have been diagnosed with Type 2 diabetes.

The presence of diabetes in Latin and Hispanic communities gives Schwartz even more reason to do something to help.

“How can we reverse this scenario?” she asks. The answer is right in front of us, she says with excitement. “Food and cooking! Real food, that is pure fuel for the body.”

She says that’s one of the inspirations for writing this book: To provide a road map for addressing this national crisis, and the road leads us to the kitchen.

Schwartz is very excited to publish her third book because it stands for the evolution of her work.

While her previous books, The Brazilian Kitchen, and My Rio de Janeiro: A Cookbook are true testaments to Brazilian cuisine, her new book focuses on healthy recipes that will work for the whole family.

“Health is such a universal theme; it will always have the highest claims on people’s affections, no matter how good or bad the economy is,” the chef says, “And it just feels great to help people make good food choices. I see the impact of my work with my very own eyes.”

Schwartz loves when her fans send her recipes that they are cooking from her cookbooks, and especially when the whole family is in the kitchen cooking together. “That’s the power of cooking! It brings everyone together!” she says.

What makes her latest book different from the rest, besides the recipes being incredibly healthy and delicious, is that Schwartz challenges the reader to look at the kitchen with a different perspective.

“Instead of seeing the kitchen as a place where you have to shop, prep, cook, eat and clean—try to view your kitchen as your health sanctuary,” Schartz says. “It’s the grand central of your home, but not just in architecture and décor, but really, the entire health of your family can be traced in your kitchen.”

Schwartz suggests to turn on the music, put on an apron, and see cooking as a source of health, a way of relaxation, family gathering, therapy; a place where you can sing and dance, exercise and talk— while cooking an amazingly healthy meal.

All of the recipes featured in the book are diabetes-friendly.

Schwartz tried to use mostly lean meats, in fact, you won’t see a single recipe for red meat.

She works with fish and has included one recipe for shrimp because she couldn’t resist featuring the Shrimp with Caipirinha Vinaigrette recipe that she did on the Today Show during the last Olympic games.

When it comes to desserts, she completely stayed away from industrial white sugar, always using healthier alternatives like coconut sugar, or brown sugar and always in low amounts.

She also provides a few gluten-free recipes, which minus a few ingredients, are still incredibly delicious.

She also had many recipe testers involved in creating the cookbook, because she explains what’s clear for the author is not always is clear to other people. Having testers involved helps her identify hidden points that she used to improve each recipe.

The greatest thing about Fresh and Flavorful Latin Superfoods is that it features delicious recipes first– and it just so happens that they’re really good for you.

And, that, according to Schwartz is the key to cooking healthy foods the right way. 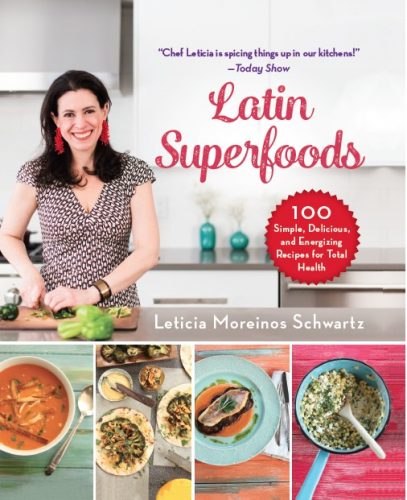 You can preorder Fresh and Flavorful Latin Superfoods today on Amazon. The book will be released nationwide on October 15th.