Researchers have found that light exercise, such as pedaling a stationary bike, while sitting at a desk improved insulin responses.

Kinesiologists at the University of Massachusetts Amherst found that insulin levels following a test meal were lower when sedentary workers used a pedal desk compared to a standard desk.

They found that work skills were not decreased in the group that took part in light exercise.

Researchers conclude that pedal desks could have the potential to achieve public and occupational health goals in sedentary work environments.

They point out that physical inactivity and sedentary work environments have been linked to higher rates of obesity, diabetes and heart disease through insulin resistance and other mechanisms.

Dr. Stuart Chipkin, an endocrinologist who studies the impact of physical activity and medications on insulin sensitivity and skeletal muscle metabolism at UMass Amherst’s School of Public Health and Health Sciences, explains that instead of approaching the problem by trying to squeeze intermittent activity into a largely sedentary work routine, his research chose to integrate physical activity into the workday. 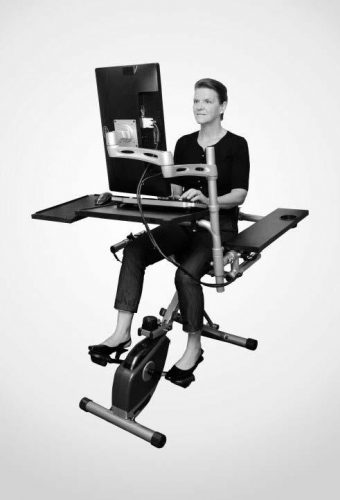 For the study, researchers recruited 12 overweight/obese full-time sedentary office workers. Six were men and six women. They were tested in two conditions: pedaling at self-selected light-intensity pace for two hours, and working while seated for two hours at a conventional desk.

In both conditions, participants performed computer-based tasks and were tested on mouse proficiency, typing speed and accuracy, reading comprehension, concentration, and attention.

The participants also provided blood samples after eating a light meal for analysis of metabolic responses of glucose, insulin and free fatty acids, a link between obesity, insulin resistance and type 2 diabetes.

“It took much less insulin to keep their blood sugars the same,” Chipkin notes. “This means that the body doesn’t work so hard to maintain blood glucose and fatty acid levels with the use of the pedal desk compared to a standard desk.”

While there were no changes in blood glucose or free fatty acids, none would be expected in a group of subjects without diabetes, Chipkin mentions.

In future studies, Chipkin plans to explore the impact of the pedal desk on people with diabetes.

He and colleagues would next like to conduct a larger, longer-term study, perhaps in a real-world setting where half the office staff uses a pedal desk and half use a conventional desk.

The study was supported by a grant from the National Institute of Occupational Safety and Health to UMass Lowell, which awarded study funds to the UMass Amherst research team.

Results appear in the October issue of Medicine & Science in Sports & Exercise.