Researchers at Cal Tech in Pasadena, Calif., are developing a new device that may one day prevent diabetic retinopathy, the leading cause of vision loss globally.

Diabetic retinopathy is a complication of diabetes in which the blood vessels that supply the retina start to die, and patients experience progressive vision loss over time.

To compensate for the dead blood vessels, new ones start to grow, but they don’t develop properly, and often ooze into the clear part of the eye, causing blindness by obstructing the vision further.

That’s where a medical engineer, Colin Cook, and his team come into play.  Working with Professor Yu-Chong Tai, Cook and his team have designed a “glow-in-the-dark” contact lens that has the potential to prevent diabetic retinopathy by reducing the retina’s oxygen demands using light. 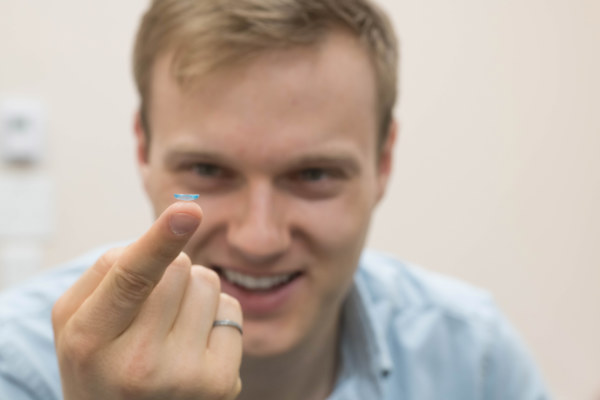 The phototherapeutic hypothesis — or using light as a treatment — has been used in the past and was proposed many years ago by Professor Geoffrey Arden, according to Cook in an interview with dLife.

However, Cook points out, to-date the mechanism of delivery has been a light emitting “sleep mask,” which shines light through closed eyelids.  “The device suffers from poor long-term patient compliance,”  he says and is uncomfortable for patients to wear while sleeping.

“We developed the phototherapeutic lens to overcome this limitation since several overnight lens systems have demonstrated high patient compliance,” he says.  “Our lenses also provide benefits in terms of precise dosing as the light shines directly onto the retina, without absorbance from the eyelid.”

How Does it Work?

According to an article posted to Cal Tech News, a key to the researchers’ success is the eye’s rod cells, which provide vision in low-light conditions.

“The rod cells need and use a lot more oxygen in the dark than they do in the light,” the article explains, “it’s been hypothesized for two decades that much of the damage caused to the retina by diabetic retinopathy occurs when the rod cells crank up their oxygen demands at night.”

Your rod cells consume about twice as much oxygen in the dark as they do in the light, Cook explains in the article.

For that reason, the contact lens reduces the retina’s night-time oxygen demand by giving the rod cells a faint amount of light by glowing in the dark.  All this happens while the patient sleeps peacefully.

“If we turn metabolism in the retina down, we should be able to prevent some of the damage that occurs,” Cook explains in the article.

In order to make the lens glow, the researchers used the same mechanism that makes watches glow at night:  Tiny vials filled with tritium, a radioactive form of hydrogen gas that emits electrons as it decays, the article states.  Those electrons are converted into light by a phosphorescent coating.  This will provide a constant light source for the lifetime of the contact lens.

Cook expects the lenses to be compatible with existing therapies. “The hope is that the lenses can slow progression of the disease so that invasive therapies can be postponed,” he told dLife.

He envisions the lens to hopefully be used during both early and late stage of the disease, however, he says clinical trials will be necessary to determine when the lenses are therapeutically useful. 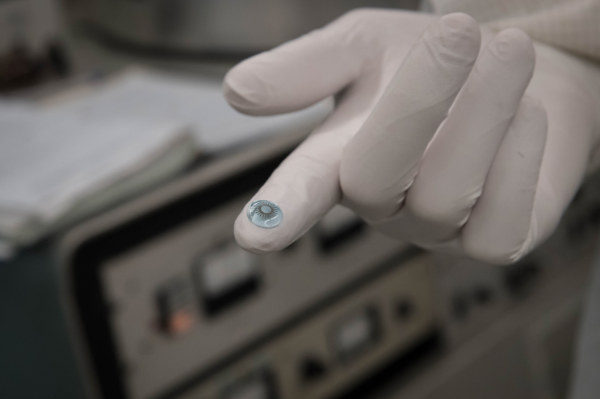 As far as what challenges lie ahead, Cook is confident that the technical challenges for the device have been overcome.  “It is primarily a matter of transferring fabrication to a certified facility and completing the necessary preclinical testing to apply for clinical trial approval,” he indicates.

Cook’s team has collaborated very closely with ophthalmologists in Dr. Humayun’s group at the University of Southern California on this project.

Testing of the lens has been underway and early results have been promising, with rod cell activity reduced as much as 90%.

“I believe many of today’s medical challenges can be effectively tackled by interdisciplinary teams,” Cook says, “I hope these sorts of collaborations between physicians, engineers, and scientists will continue to grow for the sake of patients everywhere.”

Test your knowledge about diabetes and your eye health by taking our “Eye Q” Quiz here.  Learn all about the causes, symptoms, diagnosis, and treatment of diabetic retinopathy here.

2.     “Glowing Contact Lens Could Prevent a Leading Cause of Blindness” (2018, April 23),  Retrieved from http://www.caltech.edu/news/glowing-contact-lens-could-prevent-leading-cause-blindness-82050