By: Aatur Singhi, University of Pittsburgh

The question was “What is the pancreas?” Unbeknownst to Alex Trebek, the show’s beloved host, the cells that line the duct of his pancreas would develop into pancreatic cancer or pancreatic ductal adenocarcinoma. Trebek announced on March 6, 2019, that he has pancreatic cancer, but that he will fight the disease and keep hosting the show. And in fact, he was back at work March 12.

“Truth told, I have to because, under the terms of my contract, I have to host ‘Jeopardy’ for three more years,” he said jokingly. “So help me. Keep the faith, and we’ll win. We’ll get it done.”

Although Trebek’s recovery is still unknown, researchers are trying to develop diagnostic tests that will let people know earlier that they have this form of cancer. A study my colleagues and I recently published identified genetic differences in patients that might make current chemotherapies more effective.

Hard to Detect, Hard to Treat

What makes pancreatic cancer so deadly is that it is often found late in its disease course, as in the case of Trebek. Hence, time is of the essence when it comes to treatment.

Current options for most patients are chemotherapy, radiation and, for a minority, surgery. But every pancreatic cancer is different, and therefore it requires a personalized approach, such as understanding the different genetic changes occurring in each patient’s pancreatic cancer.

At the University of Pittsburgh Medical Center (UPMC), we try to genetically profile every patient with pancreatic cancer to define their best course of treatment. While pancreatic cancer is so dire, there are genetic changes that can be targeted with currently available medications, and it’s important to identify them sooner than later.

But, in order for us to accomplish this, we have to know what genomic changes to look for in pancreatic cancer. Hence, in collaboration with Foundation Medicine, my research team and I genetically profiled 3,594 patients from all over the world.

We were looking for genetic changes that are linked to known therapeutic regimens for not only pancreatic cancer but all cancer types. This approach has had some success with other cancer types.

For example, a genetic mutation was found in some types of lung cancer that was sensitive to immunotherapy drugs such as Keytruda. That drug had first gained FDA approval for treatment of melanoma.

With such a large and diverse patient population, it is not surprising that there were a number of key findings from our study.

Mutations That Could be Targeted

Second, we discovered a significant number of pancreatic cancer patients harbored mutations in their germline DNA, or in other words, a genetic change that has been incorporated into every cell in their body.

We were not surprised that these genes were frequently mutated among patients within our study and additional genes related to them were also found to be altered. This information paves the way for improved germline testing for patients that may have a history of pancreatic cancer with implications for their loved ones. 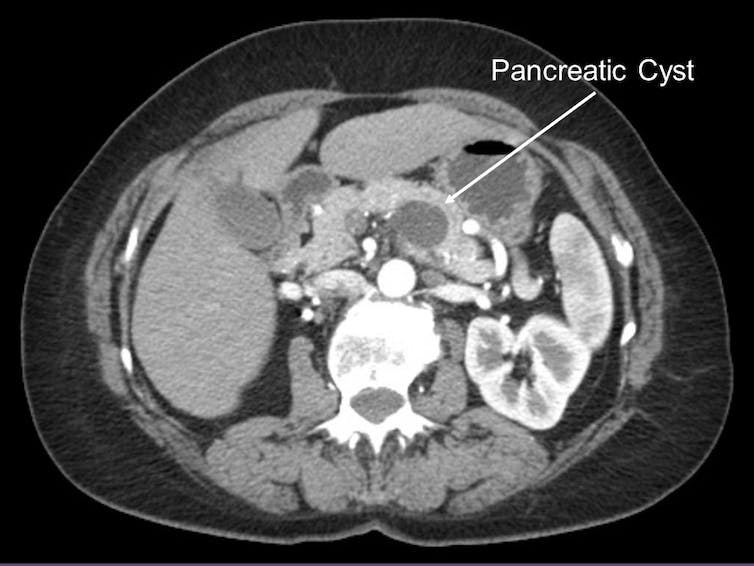 In 2017, our team at UPMC reported the creation and validation of a clinically available test to evaluate patients with pancreatic cysts called PancreaSeq. PancreaSeq evaluates the genetic changes in pancreatic cyst fluid to identify those cysts that are likely to transform into pancreatic cancer. It is used by several institutions throughout the U.S.

We believe that our study provides a compendium of known genetic alterations for pancreatic cancer that may serve as a clinical resource to not only guide future treatment for patients undergoing targeted genetic profiling, but familial pancreatic cancer testing and early detection.

Aatur Singhi, Professor of Anatomy and Pathology, University of Pittsburgh

Story image: A pancreatic cyst, marked by an arrow, as shown on an MRI. Only a small percentage of such cysts lead to cancer. University of Pittsburgh Medical Center, CC BY-SA

Learn more about the link between diabetes and pancreatic cancer here.