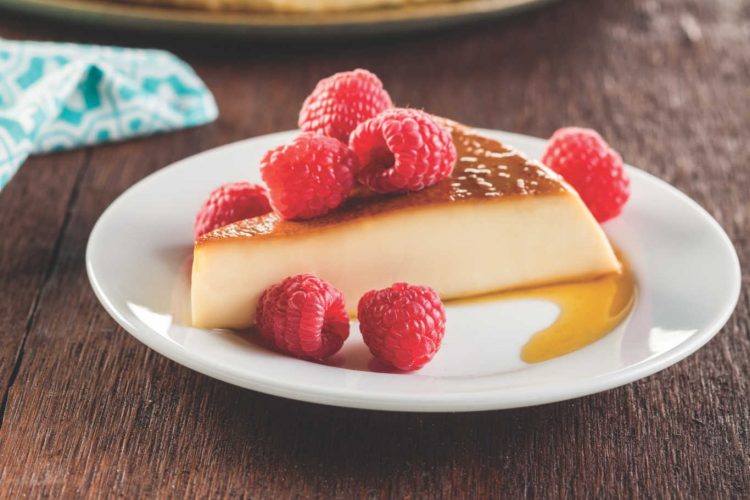 You might be asking yourself, how it’s possible to have a flan as a dessert? Hoffman says the magic trick was not using condensed milk and using fat-free evaporated milk instead. And, using just enough caramel to make this dessert delicious but still guilt-free.

1. Preheat the oven to 350 degrees Fahrenheit.

4. Beat the eggs in a medium bowl. Slowly whisk into the milk mixture until well blended. Pour into the baking dish.

5. Place the baking dish with the flan mixture into a 9×13-inch roasting pan and fill the roasting pan with enough hot water to come one-third of the way up the sides of the baking dish. Bake until the custard is set but jiggles slightly in the center, 50–55 minutes.

6. Transfer the pan to a rack; let cool 1 hour. Refrigerate until well chilled, about 3 hours or overnight. To un-mold, run the tip of a small knife around the edge of the flan. Place a large flat plate on top of the flan and flip it over. Cut the flan into wedges and serve each wedge with 1/3 cup raspberries.